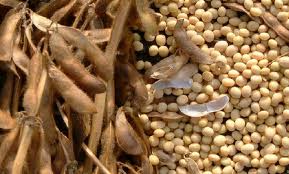 As you may know from my posts here, my transition to a more plant-based diet had been a long time coming, 18 years in fact. So four months ago when I cut out meat and poultry, opting for plants and occasional seafood, I was more than ready. In fact I knew I would have a smooth transition because of the variety of textured vegetables available that I love and I could always use soy products. I had gotten soy Italian sausage and lunch meat and a few frozen traditional Indian dishes I like with tofu, a form of soy. With soy, I wouldn’t have to worry about getting enough protein, something that vegetarians have to be conscious of. Though some people are allergic to soy I don’t have that problem, though I never opted for it as a supplement to my breast milk because of reports of how soy negatively affects hormonal development in baby boys.* Now after reading a more extensive report about a month ago, not only will I avoid giving soy to my children, but soy is something that I will be careful to avoid for three main reasons:

Effect on all children—One property in soy is similar to our bodies’ estrogen and when it enters the body, the body thinks there is a heightened level in our bodies. The increase in estrogen has been shown to disrupt sex hormonal development in boys and girls, giving them doses as strong as multiple birth control pills and negatively impacting their reproductive systems. For boys, this could mean a lower sperm count. Both boys and girls could also be at a higher risk for gender-organ cancers.

Effect on endocrine system—All hormones come from glands that make up our endocrine system, including our thyroid. When the estrogen-mimicking property in soy gets into our bodies it can affect the thyroid by causing hypothyroidism. I know a number of friends with this issue or the threat of it; one has been a vegetarian for years and had consumed a large amount of soy for those years until she heard it may be the cause of her problem.

Effect on soy supply—Ninety percent of America’s soy bean crops have been genetically modified, which means bacteria or viruses have been injected into the food’s seed to change its DNA structure. Food companies do this so the foods become resistant to pesticides that are sprayed on crops. The danger to us is that we are ingesting the unknown substances used to modify the foods and the powerful chemicals used to spray them. Thus, the food and the chemicals both potentially cause us harm, even death.

Even with the push in our nation to consume soy, I believe these points make reconsidering eating soy worthwhile.

*Nourishing Traditions, Revised Second Edition by Sally Fallon; New Trends Publishing, 2001.
Besides Nourishing Traditions and the website I linked above, I have amassed information in this post from my readings over the years. As always, I challenge you to check for yourself what I have found to help me.